My due date is tomorrow! I was checked for the first time today to see if I was dilated or effaced (which hurt a lot). Anyway, the doctor told me I was 0% dilated and 0% effaced which concerned me because usually I guess people are at least at a 1 or a 2 by now! It was discouraging. Does this mean I am going to end up being 42 weeks pregnant (yikes) and have to be induced or have a C-section?! I am a little beside myself right now. Anyone have a similar experience? I know everyone is different but I am just so ready to have this baby and to feel like it could be still 2 weeks away! That's just insane!
12 comments

Guess Who This Is 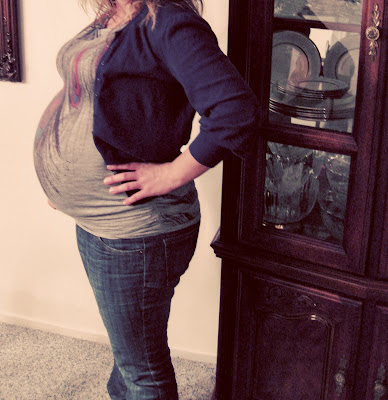 If any of you guessed Gisele Bundchen, you are...

It's me, but I know it kinda looks like her pregnant body so I don't blame you for guessing her. I seriously get it all the time.

We have purchased our car seat, snap and go, pack n play (which we are using for the bassinet and changing table to save on space), and we are waiting on a bid for my double electric breast pump. Fun!! I can't wait to hook that thing up :) I need to find a diaper bag. We've got diapers, wipes and tons of cute clothes and great stuff (thanks to my wonderful friends and family that attended my baby showers and sent gifts... Thanks so much!!!)and yet there is still so much to get it seems like! And then there's the question, what to pack in the hospital bag? So far we've got snacks, camera, socks, grant comfy outfits, outfit to bring home baby, a couple receiving blankets, laptop, makeup, shampoo and conditioner, change for the vending machine, uh... am I forgetting anything?!

In a recent post, I mentioned how weird it was coming to the realization that my baby already has a face. Well, yesterday I saw it! It was during my 37 week ultrasound that my mom and I saw the precious one's profile as he held his fist up to his face. The only problem was, his profile looked like Homer Simpson! Mayday Mayday!! My mom and I were both kinda like, "Uhm, cute...kinda" with worried looks, I burst out in tears. Just kidding. It wasn't that dramatic and I have enough sense to know that I can't possibly tell what my bundle of joy will look like when he makes his appearance from a fuzzy ultrasound pic (right?! anyone, anyone??) where you can't make out what anything is unless the ultrasound tech tells you and points it out. "This is his femur, this is his head, this is his stomach, this is his middle finger..." Just kidding. I'm sure they don't point that out. Anyway. I panicked a little, but rest assured, I will love my baby whether he looks as cute as a button or like a grown cartoon man. Luckily, our baby boy's brain is the normal size, so in that respect, he won't be like Homer.

(Has anyone else had this experience where the baby looked weird in the ultrasound? Or even right after they were born? I need some reassurance here. Please say yes!)

The rest of the ultrasound was exciting though. He was in the right position (head down) which I figured he wasn't since I am constantly feeling blunt force trauma to my hips (not in my ribs like everyone else). It hurts!! And I figured it was him kicking me, but it turns out, his head is down so they must be punches. (I'm always so surprised when things go right with this pregnancy for some reason). The ultrasound lady also said, "he must be thinking about something because I can see his eyes moving around". That was funny. His foot was so far over on my side that she couldn't see it with the machine and he has grown so much since the last ultrasound. She did some calculations and said he weighs about 6.5 pounds (so what's the other 35 pounds about?!) so she estimates that he'll weight about 7.5-8 lbs when he's born. We'll see... I will be full term on Wednesday so they say he could come any day, but I'm not counting on it. I expect him around Dec. 10th or something... although I wouldn't mind him coming earlier. Maybe that's what he was thinking about. Debating whether or not to come out now or wait a little while longer...I wonder what I could do to sway his decision. Let the mind games and manipulation that is parenting begin! Or is that what you do when you're the kid?