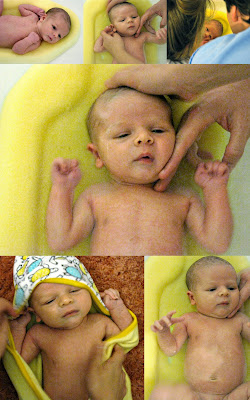 Klein got his first tubby last nite. It was fun and he seemed to like it. The picture on the top left is him right when he got in. He's deciding what he thinks about the whole bath thing. It was fun as Grant held his head straight and I cleaned him. We tried to quickly dry him off so he wouldn't get cold. It was a fun Family Home Evening activity.

It seems that when I gave birth, I entered into the Twilight Zone. Nothing is normal yet and taking care of the little man has proved to be a taxing task. Although, I really love it. There are so many wonderful things about being a new mom, but so many difficult things as well. The hardest part, you guessed it, the lack of sleep in the night. In the hospital, we had to wake him up to eat, but now, he has certainly mastered the task of waking me up to eat. Grant takes the first shift in the nite, from 10 to 3, and then I take over after that.

I am just so grateful for a patient partner, who does so much to help, who has really embraced his role as a father, but hasn't forgotten about being a husband.

Nothing to complain about, just a lot of things to get used to. Klein is such a good baby and makes the funniest faces to entertain me during the day. And I love his squeaks. And when he straightens his legs right out when I change him. Also, when he goes cross-eyed and sticks his lips out like a fish. He is a fun little guy. He will be three weeks on Tuesday and we are the happiest family living in the Twilight Zone.

Michelle- A look at our lovely life said...

He is so cute! Being a new mom is sooo crazy. It's so hard but not hard at the same time. It makes you want to cry with happiness and weep with weakness. I am so happy that you have such a supportive husband. I have an incredible one too and it makes all the difference (and will continue to make all the difference as they grow older). Love you lots, Cal! So happy for you, Grant, and Klein.

welcome to the twilight zone guys! take lots of pictures, they're only that little once!

it only gets better callie!

What a good little sport - no tears!

He's so precious! Please tell me you'll bring him to book club, and that you'll be able to get enough sleep to still come to book club! Have a wonderful Christmas with your little miracle!

I love your description being like the twighlight zone. I remeber those days. He is so cute!

Being a new mama is wonderful! So fun and exhausting! It does get easier. Just enjoy the ride as much as you can and let everything else go. Glad that he has a good daddy too. Daddies are so important for us and them. :) Congrats you two. He's such the handsome little man. ;)

He is so adorable...Keep the pix coming!

He could not be more darling! Have a wonderful Christmas with the cute little guy!!

what a cutie! he's gorgeous!