Deutschland in the OC 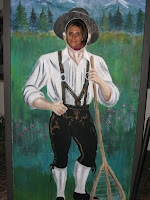 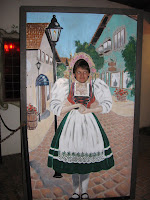 There is this little German village tucked away right in the heart of Huntington Beach. It is called Old World Village. It's actually really random where it is situated. It sits right between a huge, new outdoor mall and a huge, new 24 Hour Fitness. You would never know it was there unless you had German Vision, which Grant happens to have. So, we went to check it out for our "date night"(we have our "date night" every friday, but we unofficially go out during the week :) The whole village consists of about 15 shops and businesses and a German restaurant called... Old World Restaurant (who would have guessed). Our waitress was about 60 years old wearing a dirndl, which Grant's wearing in the picture above. She had a German accent and was serving all the tables in the entire restaurant by herself. So cute. I thought the food was good, but Grant was a little disappointed. I guess European food just isn't as good in America, no matter who's cooking it. After dinner, we took advantage of the photo op that presented itself on our way out. I think we make a pretty good couple.

Then, there was the Orange International Street Fair that is a traditional labor day activity here. Finding a parking space was a lot more difficult than we thought but when we walked up we realized why. They allow you to drink beer in the street! This privilage draws quite a crowd. There were tons of booths set up with food from all parts of the earth (which basically translated into a sausage with trimmings from all parts of the earth). Good fun. Grant liked wandering around German street and we treated ourselves to a norwegian cookie for dessert. 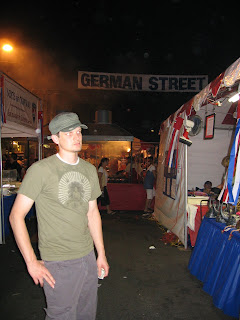 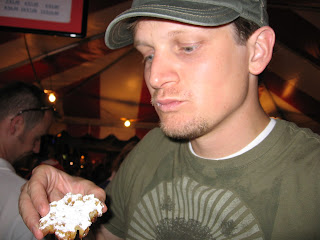 This German explosion has really had an effect on Grant. Now he is considering applying for Deloitte Germany "just for fun". Yeah, it's all fun and games until someone gets a job offer!

Hey I have been there before. It was during halloween/Octoberfest for Boy Scouts we were learning about other cultures. I remember being cold. About the food well I would have to say that there is no way you can get Brauts as fresh as they are out here. Did grant order in German it would have probably gotten you like wicked awesome cool points.